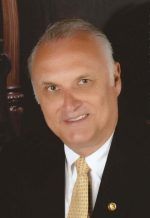 “The British 1881 Census Indexing Project: A Window to the Past”

Talk Abstract:
This presentation provides a review of this huge pioneering indexing
project, the first of its size and scope, and the benefits and
cautions of conducting research in this and other 19th century census
records. The context of life in the British Isles in 1881 will be
considered, as well as some strange and entertaining entries from the
actual census. In 1987 executives of the LDS Family History
Department met in London, England with the British Genealogical Record
Users Committee (BGRUC), an ad hoc group composed of organizations
committed to providing access to and preservation of genealogical and
historical records. A proposal was made and accepted to index the 1881
census, the latest census released at that time for public research
(1891, 1901 and 1911 are now available). On the night of Sunday,
April 3rd, 1881 the entire population of England, Wales and Scotland,
as well as the inhabitants of the Isle of Man and the Channel Islands,
paused to pose for a collective portrait. The image they left does not
record individual countenances, but fortunately for the millions of
their descendants, it does preserve equally important features of each
person who managed to be included in the depiction. This virtual
snapshot in history includes over thirty million people. Queen
Victoria was in the 44th year of a 63-year reign; William Ewart
Gladstone’s second term as a liberal prime minister had recently
begun; one in every seven Britons lived in London; a labourer’s weekly
wage was eighteen shillings (about 90p); compulsory education for
children, 5 to 13, had only recently been legislated; and work on the
Channel Tunnel was begun at Folkestone but stopped again after only
879 yards. Individual entries discovered in the census can be both
amusing and poignant: consider the wife described as “Minds her own
business,” the 30-year-old unmarried son of Harriet Faucet, named
“Kitchen,” or seven-month-old Mary Cooper “found on a doorstep.”

Speaker Bio:
Stephen C. Young, AG, born and raised in London, Ontario, Canada, has
researched his family history since the late 1970s. He earned a BA in
Family and Local History at Brigham Young University (1985), an MA in
American History (emphasis in Public History) at Bowling Green State
University in Ohio (1990), and completed some doctoral work at Wayne
State University in Detroit. An employee of FamilySearch since 1988,
Stephen has enjoyed several assignments during this time: in the
Family History Library administration, and his four year appointment
(1992-1996) in England supervising the British 1881 Census Project
(pre-Internet indexing). He is now an Assistant Chief Genealogical
Officer and project manager for FamilySearch. His genealogical
research accreditation in English Canadian research has been active
with ICAPGen since 1989. He and his wife, Michelle, live in Provo and
have five children with the last still at home, a sophomore at
Timpview High School.

Meeting Agenda
Click here for meeting agenda for the UVTAGG meeting where this talk or class was presented (will open in a new browser tab).

Viewing of videos and handouts is only available to members who have logged in. If you are a member, please login or sign up below.

NOTICE: This presentation is part of a set of over 400 presentations on genealogy and family history produced by "UVTAGG: The Utah Valley Technology and Genealogy Group".
For full details and to join, see the website https://uvtagg.org.